From Chanute AFB we headed farther north to Hammond and Munster, Indiana.  This is the area where Beth was raised, and where we lived for about two years following my military service.
We moved to Hammond, when our oldest daughter Sarah was barely two weeks old!

﻿
﻿ The brick house on Tapper, now absolutely dwarfed by an 90 year old pine tree, is where we lived begining in April of 1974 as I finished school on the GI Bill, and during the ensuing period when I worked for Procter and Gamble/Folger's Coffee Division.  Beth's parents bought this house specifically to rent to us, and sold it shortly after we moved to Kansas City in 1976.

(Note the obligatory basketball goal at the near corner of the house!)

﻿
﻿ The house on Woodmar is where Beth and her brother and sister all grew up. It was new when her parents moved into it in 1950.  Beth was born somewhat after that!  I am not allowed to say just when!


The house on Walnut, in Munster, Indiana, is where Beth's parents lived beginning in 1976, and is what our three kids have always known as Grandpa and Grandma B's house! 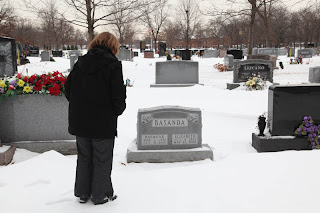 Today we also visited the cemetary where Beth's parents now rest.
We took extra time to locate the special plaque that recognizes her father's military service during World War II, and the Bronze Star Medal http://en.wikipedia.org/wiki/Bronze_Star_Medal  that he was awarded for valor as his outfit fought near the heavily fortified Maginot Line, which marked the french border. If you click on the photo you will get a larger image that is readable.

We then headed East on US Route 30 for North Central Indiana, the route where just four days earlier hundreds of motorists were stranded for up to two days in an unforecasted freak snow storm of what the locals know as "lake effect snow", which is not associated with any weather system, but is instead the result of strong northwest to southeast winds coming off of Lake Michigan near South Bend, Indiana.  The road was now clear, and the photo from the moving car does not do justice to amount of snow that was still present.

We continue to be fortunate on this coast-to-coast meandering trip that we have encountered a minimal amount of bad weather, and we appear to be shooting a gap in weather systems that will get us all the way to Maryland mostly unscathed!

Posted by MGBJockey at 6:54 PM